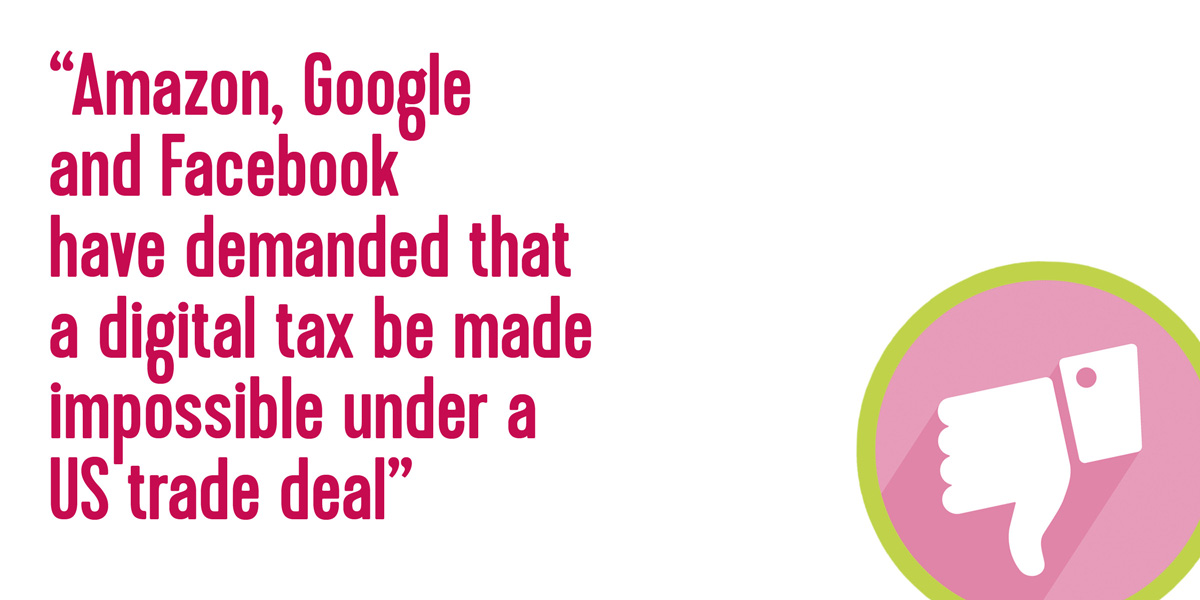 “Every generation wants their own version of #freedom - freedom to shape their own lives... This generation are #Uber- riding #Airbnb-ing #Deliveroo-eating #freedomfighters”
Liz Truss (later secretary of state for international trade) on Twitter, March 19, 2018

“Today’s tech billionaires have a lot in common with a previous generation of capitalist titans – perhaps too much for their own good.”
The Economist65

Back in the late nineteenth century, a small group of businessmen captured the American economy, using new technologies like railways and new practices in banking to build monopolies which brought them unprecedented levels of wealth and power. They were labelled the ‘robber barons’ and became synonymous with obscene levels of inequality and the capture of politics by private interests. It took decades of protest and mobilisation to rein in these corporate titans, by taxing, regulating, breaking up and taking them into public ownership.

Today, a new group of corporations has risen, developing technologies which have become central to our economy and society, and using their control of these technologies to amass unimaginable fortunes. Their power has had an extraordinary impact on how our economy works, on how we communicate with each other, and even on the working of our democracy. Big Tech titans like Amazon, Google and Facebook have become more powerful and wealthy than most governments, and in the coming decades their power is only likely to grow, as more of our economy becomes ‘digital’.

In order to cement their power on the global stage, these corporations are now pushing for the development of new digital trade (sometimes known as e‑commerce) rules in trade deals. The US and Britain are among the countries pushing these rules the hardest, meaning there is certain to be a far‑reaching digital trade chapter in a US trade deal. And while it’s true that countries need to find ways to regulate the power of Big Tech, these trade ‘rules’ are not intended to do that – in fact they achieve the very opposite. Like the investment chapters discussed above, they are essentially corporate charters, cementing the power of Big Tech by ruling that the digital sphere should be deregulated from the start.

Technologies that work for profit, not people

These rules would help embed a new global standard. Negotiations to create digital trade rules in the World Trade Organisation have stalled because of opposition from many developing countries,71 who rightly fear the power these rules would give big business in their own countries, hampering their ability to build their own high‑tech sectors because they would be challenged by the already powerful Silicon Valley companies. The concern is that, if rich countries begin developing these rules in their own trade deals, they will become the de facto rules of the whole global economy. As Parminder Singh of IT for Change says: “We are not advocating digital de‑globalisation. What is sought is simply a fair place for developing countries, and for public interest, in the emerging global digital order.”

The technologies developed in recent decades have transformed the nature of our economy. Who controls these technologies going forward will determine what sort of a world we will live in over the decades ahead. This technology presents the possibility of better healthcare, better education, more effective farming and much more. But if that technology is simply corporate property, we’re in danger of seeing public goods turned into commodities, and the means to enjoy a good life will become increasingly inaccessible for the majority. We will certainly need rules through which society can harness these technologies for the common good. But at a time when many people across the world still have no access to these technologies, we cannot allow those who are profiting from them to dictate what those rules will look like.

Both Britain and the US have made clear digital trade will be a major component of the US trade deal. The US is demanding “state‑of‑the‑art rules to ensure that the UK does not impose measures that restrict cross-border data flows and does not require the use or installation of local computing facilities” and which would “prevent governments from mandating the disclosure of computer source code or algorithms”. There would seem to be no room for opt‑outs even for very sensitive sectors like healthcare data, potentially allowing big business to profit from the NHS database.

The US calls for rules that limit online platforms’ liability for third‑party content. This is extremely worrying as it’s a very live debate even within the US, with Democrats demanding that Facebook should be forced to take action to prevent the spread of ‘fake news’ and hate speech. Although the US accepts some exceptions could be made for “legitimate public policy objectives”, it is deeply concerning that a US trade deal could prevent Britain tackling such issues in the most effective way.

While the UK’s position is vaguer, paying lip service to the need to protect privacy and consumer rights, we know that the government is very keen on far‑reaching digital standards. Both former trade secretary Liam Fox and current prime minister Boris Johnson have been accused of misunderstanding the importance of our current online protections.72 The leaked papers confirm US dislike of these online regulations too, citing “specific concerns with how GDPR [our current privacy regulation] is being implemented, while the UK declared itself a ‘strong supporter of free flows of data’ ”.

Meanwhile, both US business federations and trade experts have warned that Britain’s proposed digital services tax could derail the entire trade talks, suggesting such a tax is incompatible with the provisions of such a deal.73 US business federations call for a trade deal to promote “open access to government‑generated public data to enhance innovative use in commercial applications and services”, a possible attempt to get their hands on NHS data, which they can then use to create new products to sell back to the NHS.74

Our personal data is one of the most lucrative resources in the digital economy, and has been described as the ‘new oil’. It allows corporations to understand our behaviour, mindset, fears and prejudices, and to market and develop products based on this information. The collection of data through devices like smart watches can help corporations better control and exploit workforces, and automate jobs.75 Corporations want to use trade rules to cement their control over our data, in particular by prohibiting governments from limiting the export of our data overseas. Google is already moving British users’ data to the US, sparking concerns from privacy campaigners at the Open Rights Group that “Moving people’s personal information to the USA makes it easier for mass surveillance programmes to access it. There is nearly no privacy protection for non‑US citizens.”76

Source code determines how computer software works. Increasingly it’s vital for the functioning of our phones, cars and household appliances. There is a push in trade deals to allow corporations to keep source code and algorithms secret, even from regulators. Yet regulators need to understand the algorithms involved in high frequency financial trading, for example, to have a hope of preventing economic crises,77 while health and safety regulators need to understand how cars are programmed if they’re to uphold safety, or prevent companies like Volkswagen bypassing emissions standards. We are also just beginning to recognise how algorithms can unintentionally incorporate society’s prejudices. Especially when such algorithms are used in recruitment, or by the police, secrecy can be incredibly harmful.78

Another worrying rule is that corporations engaged in digital trade cannot be required to set up a local subsidiary within a country. For Big Tech, which governments already find difficult to tax and regulate, this deepens the problem. With no local presence, it is harder to enforce laws, rules and standards. As the International Trade Union Confederation says, “without a local presence of companies, there is no entity to sue and the ability of domestic courts to enforce labour standards, as well as other rights, is fundamentally challenged”.79

‘No more than necessary’

As in other areas of trade policy, there are proposals to put ‘necessity tests’ on digital economy regulations. This means governments could be forced to justify that any regulatory changes they make are no greater than absolutely necessary. But when it comes to dealing with new technologies, regulation is bound to be experimental. Governments should be free to see ‘what works’.