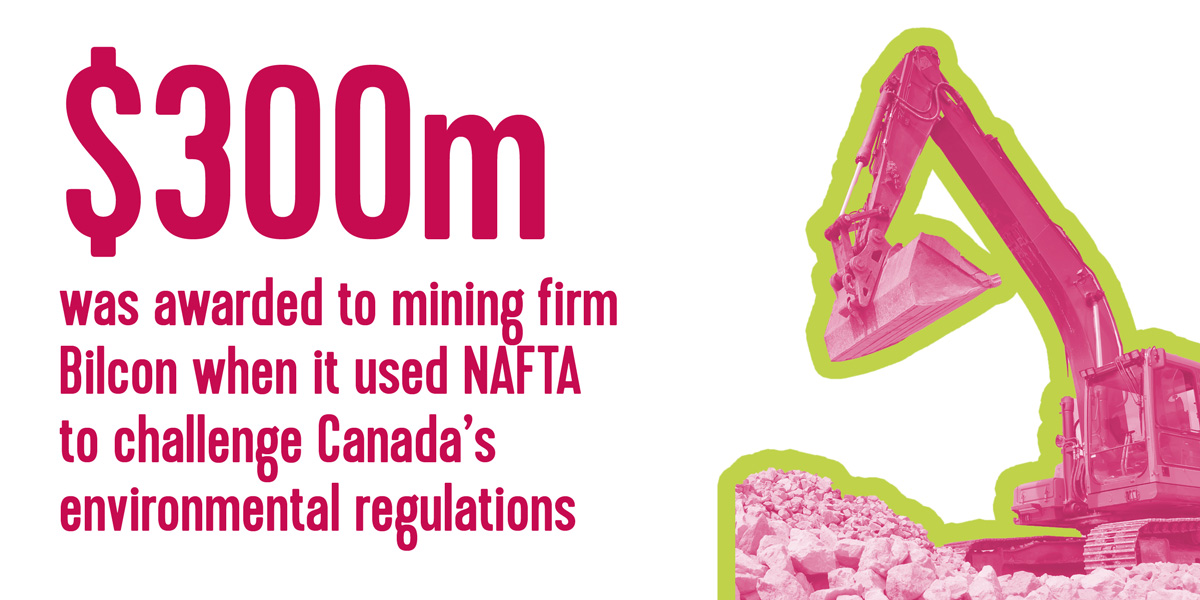 “Universal tariff reduction has increased trade in carbon‑ intensive and environmentally destructive products, such as fossil fuels and timber, more than it has for environmental goods. In some cases FTAs [free trade agreements] can also shrink the ‘policy space’ available to countries to pursue environmental goals, for example if they prohibit, or are perceived to prohibit, a country’s ability to distinguish between products according to emissions released during their production.”
The Economist Intelligence Unit80

We are living through a climate emergency. If we don’t get a grip on this crisis, our future on this planet is in jeopardy. But this is not simply a question of individuals changing their lifestyle. Climate change is driven onwards by the rules of the global economy. Trade rules and trade deals have played a significant role in exacerbating this crisis.

At one level, the very nature of trade liberalisation is problematic. The production and transportation of goods is largely dependent on fossil fuels. Promoting the movement of more and more goods around the world means environmental destruction. It exacerbates the extraction and burning of fossil fuels on an unprecedented scale.

If we took a fundamentally different approach to trade deals, then trade could help disperse renewable technologies and more carbon-efficient production methods – but at present trade rules actually ban many measures to encourage the spread of green technologies.

We also need to keep in mind that renewable technologies in themselves can only do so much. A totally renewable economy based on never‑ending growth would still quickly exhaust the world’s metals and minerals, and exacerbate global inequalities. Replacing every petrol car on the planet with an electric car would not in itself create a sustainable or fair global economy. The only answer is to fundamentally rethink our economies, including trade liberalisation as embedded in deals like that proposed between Britain and the United States.

In reality, there is a high likelihood that any trade deal with the US would increase carbon emissions. Britain admits to this possibility in its scoping paper and names energy as one of the likely ‘growth sectors’ under a deal.81 When the EU was negotiating a trade deal with the US (the now‑shelved TTIP), it predicted an additional 11 million metric tons per year of CO2 as a consequence of that agreement.82 Damage to the environment is hard‑wired into the current trade system. The idea that trade liberalisation is a solution to climate change is very wide of the mark.

A US deal would exacerbate the climate emergency

A trade deal with a climate‑denying leader like Donald Trump clearly posed a very specific and urgent challenge for Britain’s attempt to radically reduce carbon emissions. That’s why Labour’s shadow foreign secretary Lisa Nandy MP urged the government not to sign a trade deal with any country that refuses to abide by climate change obligations agreed to under the UN Paris agreement.83

A trade deal with Joe Biden could well be different in this respect, and is much more likely to mention climate change – perhaps even adopting some sort of ‘sustainability chapter’. But we shouldn’t be fooled into thinking this will solve all the problems. Sustainability chapters are often weak and unenforceable. The language might sound nice, but they are no match for the damage which trade deals can have on carbon emissions.

There are some specific elements of a US deal which would cause particular problems:

The leaked papers from the US talks show how US negotiators told Britain that it’s not even possible to mention climate change during the talks, and that it won’t be mentioned in the final deal:

“US [negotiators] responded emphatically that climate change is the most political (sensitive) question for the US, stating it is a ‘lightning rod issue’, mentioning that as of 2015, USTR [the trade representative’s office] are bound by Congress not to include mention of greenhouse gas emission reductions in trade agreements. US stated this ban would not be lifted anytime soon.”

While this reflects Trump-era concerns, it remains to be seen whether Biden will renegotiate climate-related aspects of the deal. And even if he proposed more climate-friendly language, it seems extremely unlikely that any changes would be adequate to remove the serious obstacles to climate action outlined above.

Unsurprisingly, the UK’s own assessment hedges its bets on whether the deal will increase carbon emissions, essentially saying it’s impossible to know, but certainly thinks there’s a good chance that it “could favour UK sectors which are currently more emission intensive”.