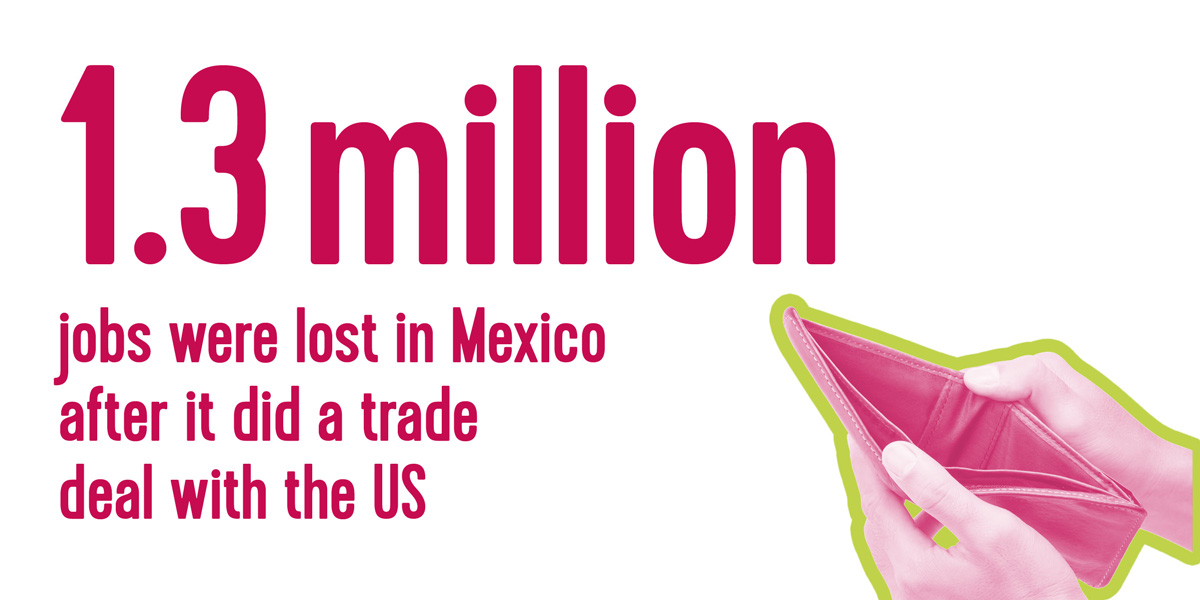 “Simply pledging to leave no one behind while appealing to the goodwill of corporations or the better angels of the super-rich are, at best, hopeful pleas for a more civic world and, at worst, wilful attempts to deflect from serious discussion of the real factors driving growing inequality, indebtedness and insecurity”
The United Nations Conference on Trade and Development, Trade and Development Report 201890

For a long time, the public have been told that trade deals bring jobs. Indeed, to listen to politicians over the last 40 years, you’d assume that trade deals only produce winners. Unfortunately, this isn’t true. Trade deals produce winners, but they also produce losers. Even standard free trade theory accepts this reality. If shirts can be produced more cheaply in Dhaka than Manchester, and protections are stripped away, then all things being equal, jobs will be lost in Manchester and gained (on lower pay) in Dhaka.

As far as possible, trade deals should be reshaped to ensure they support as many as possible in society. However it will never be possible to ensure no one loses out, and it is vital to simply acknowledge that and do something about it.

A plan to benefit the person who has lost their job or the city that has lost an industry should be a standard and required component of doing a trade deal. As a minimum, this would involve government investment in stimulating new industries, training to equip workers with new skills, and a good social safety net to ensure those workers who lose those jobs aren’t made destitute.

Strong mechanisms for redistribution, including taxation and regulation of multinational corporations, are required if the benefits of trade are really to be shared across society. But the failure of governments to take such measures in recent decades, under the rubric that ‘the market will provide’, has left those who lose out as a result of trade deals impoverished, marginalised and often deeply embittered with the global economy.

Without proper intervention, any savings trade and investment rules have brought have tended to go to those at the top. Those who have lost out have been told to ‘get on their bike’ and find another job. The vast rise in inequality in an era of unprecedented levels of free trade shows that, left to its own devices, the market will not improve the lives of the majority.

How much would Britain benefit from a US trade deal?

The government is selling a US trade deal on the basis that it will bring growth to the economy, promising that that growth will in turn lead to jobs. Growth, measured as gross domestic product (GDP), is a deeply problematic measure which in no way equates to human welfare. It says nothing about equity, and may translate into large gains for one bit of society, but a fall in living standards and loss of jobs for others. In other words, it disguises the problems with trade outlined above – that it can affect different parts of society in a radically different way, and that those who’ve gained the most from it have been those at the very top of society.

But even if we were to overlook these problems, the US trade deal seems barely worth the effort even in terms of growth. The British government projects two scenarios from a US trade deal. The more extreme deal – which by definition includes some of the most worrying aspects documented in these pages – is predicted to increase GDP by a mere 0.16% by the mid‑2030s, while a more limited deal gives gains of only 0.07%, again over 15 years.91 It’s a tiny gain, and in fact the picture gets worse when you bear in mind that Britain is heading for a dramatic decline in GDP in coming years as it leaves the EU. In 2018, Theresa May’s government estimated that loss to be 4.9% by 2035, and that’s provided a trade deal is signed with the EU. Without a trade deal, an entirely possible scenario, the loss would be 7.7%.92

Britain is negotiating with both the EU and US, but the difference in language between the two sets of talks is stark. Boris Johnson and his senior negotiators have gone out of their way to irritate and offend the EU, while talking up the possibility of an ‘ambitious’ deal with the US. This is in spite of the fact that a deal with the US would be worth so much less than a deal with the EU, something which the government’s own figures clearly bear out – a 7.7% loss to the economy against a 0.16% gain.

More worrying still, Boris Johnson seems so determined to meet US demands that he’s prepared to do a deal which is abysmally bad for Britain. It isn’t possible for Britain to sign deep trade deals with both the EU and US, because the standards between the two blocs are so different. US negotiators show they are well aware of this in the leaked documents. In fact one of Trump’s interests in doing a deal with the UK was to weaken the EU by peeling the UK away from the EU’s regulatory sphere (see ‘what the trade papers say’, below).

Johnson has been willing, perhaps even eager, to jump to these demands, even though they will leave Britain in a much worse position. While a Biden presidency is likely to adopt a more constructive relationship with Brussels, the central problem remains that a deep trade deal with the US and a very shallow deal with the EU would cause massive pain for many workers and industries. Sadly, Johnson seems keen to nonetheless adopt this strategy.

The British government predicts there will be no overall change in employment figures as a result of the deal, because jobs lost will be made up for by jobs gained. Again, this will come as cold comfort to those who lose their jobs. Particularly concerning is the prediction that the youngest in the job market – 16‑24 year olds – are those likely to suffer most from job losses.

The government suggests that there will be little threat of worse labour standards because the US “maintains high labour standards”. This is simply untrue. It is the case that the US has an extensive set of negotiating objectives around labour standards, but US labour standards are woeful compared to British ones. As the government acknowledges: “The UK also guarantees statutory leave, sick pay and paid parental leave. The US does not have any federal legal requirements for employers to provide paid leave.” The lack of protections afforded to US workers is notorious for making it extremely easy to sack staff without justification and without warning.93 British people, who on average work fairly long hours by European standards, have nothing on American workers who work an additional 250 hours per year.94

Although the US talks about the importance of International Labour Organisation conventions, it has an atrocious record of signing up to international labour standards, ratifying only two of the eight core Conventions.95 The Trade Justice Movement quotes evidence of the US denying freedom of association to public sector workers96 and denying the right to strike by allowing lawful strikers to be permanently replaced.97

Workers’ rights in Britain face real threats from a US trade deal. Apart from the pressure placed on workers’ rights directly by increased competition from the US, the inclusion of a regulatory cooperation chapter will give big business a greater say over regulation, and it’s also possible that ISDS could be used to challenge new workplace rights.

The leaked papers expose the likelihood of most people in Britain failing to see any benefit at all from the US deal, even in terms of ‘cheaper goods’ as negotiators admit “benefits tend to filter through to company profit margins rather than a full pass-through rate to consumers”. This is a pretty blunt acknowledgement of who will benefit from the deal the officials are working on – corporations, not people. The preliminary economic modelling discussed in the papers showed that “UK welfare and GDP gains from elimination of UK and US tariffs and TRQs [tariff rate quotas] on goods would be smaller under the ‘hard Brexit’ scenario, whereas for the US, the reverse held”.

Under Trump, US officials have pushed, if not bullied, Britain into the hardest Brexit position, which would mean Britain could do a deep trade deal with the US. The documents show the US telling British officials “there would be all to play for in a No Deal situation but UK commitment to the [EU] Customs Union and Single Market would make a UK-US FTA [free trade agreement] a non-starter”. In fact, US officials appear furious at the fact that previous prime minister Theresa May was willing to agree a ‘level playing field’ with the EU. A level playing field with the EU means Britain cannot sign up to US standards on food, cosmetics, or numerous other issues detailed here. This is the first aspect of the Withdrawal Agreement that Boris Johnson reneged on upon assuming office.

Where are the jobs? The case of NAFTA

Like most free trade deals, NAFTA promised Mexicans a world of plenty – in particular new jobs, cheaper products and access to larger markets for Mexican goods. The results were somewhat different, and expose why we should be so wary of such promises.

It’s estimated that 1.3 million agricultural jobs were lost in Mexico in the years following the implementation of NAFTA, with another million indirect jobs wiped out. Not all peasants lost their livelihood completely – some were reemployed on land now owned by big landowners or big business, but often in worse conditions. Others moved into the cities where they faced atrocious pay and conditions. Monthly income for self-employed farmers went into freefall – from 1,959 pesos a month in 1991 to 228 pesos in 2003. No wonder immigration into the US soared.98

Even the promise of cheaper prices wasn’t realised. Prices slightly increased in the US, and in Mexico they surged, including the price of the maize used to make Mexico’s staple food, tortillas. One study found the price of tortillas increased by 279% in NAFTA’s first decade.99 Nearly 25 years later, millions more Mexicans were living in poverty, while the minimum wage had fallen nearly 17%.100